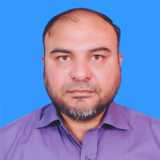 Looked after the entire administration of Taxila Cantt i.e. To include Horticulture section, Maintenance section, major/minor works and construction etc

2nd in Command and Staff Officer

To be a helpful and contributing team member of the organization