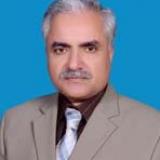 Headed a Wing in Military Intelligence Directorate responsible for overseeing all intelligence operations in FATA / Swat.

Remained employed as Chief of Staff in a multinational Military Brigade in Bunia, DRC.

Governance and Management of Defence Course.

- I am looking for smooth transition from military to corporate career as a long term engagement.
- I shall prefer a company / organisation that provides me positive work environment to optimally exploit my experience and skills to promote excellence.
- I feel I am highly qualified for top administration / senior management positions.